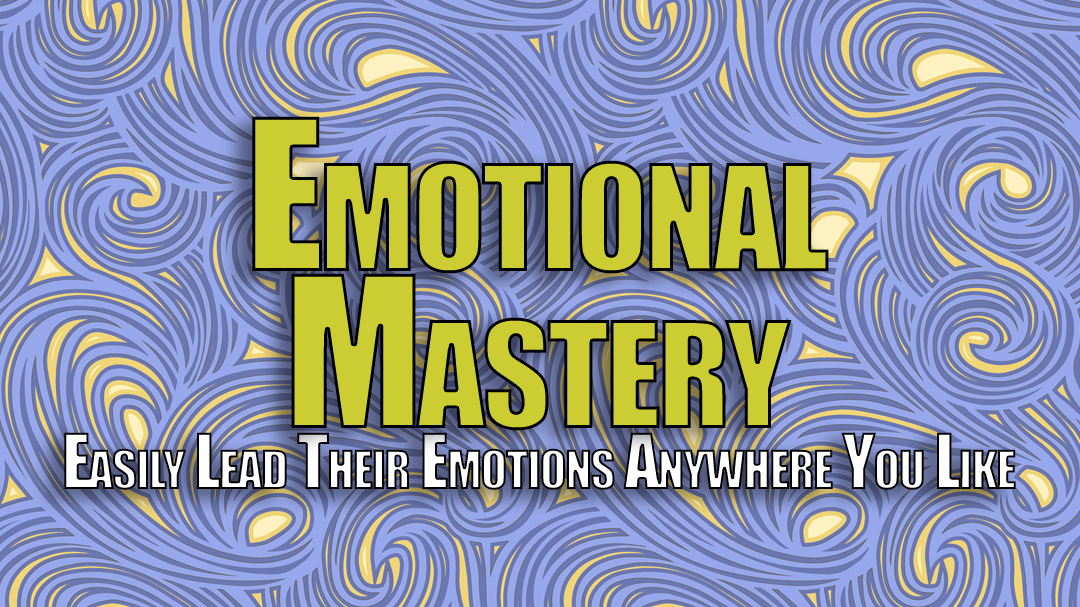 Emotional Mastery
Available in days
days after you enroll

Humans are not Borg.

Those hive minded, half human, half robot hybrids from Star Trek.

Once you join the Borg collective, your brain no longer belongs to you.

Luckily, this is only on Star Trek.

In real life, we have our own ideas, our opinions our experiences and our idea of who we are.

This is absolutely fantastic.

History is filled with seemingly insurmountable problems that were easily solved by a small group of different people.

Different people that all had different ideas in their brain.

Pointed toward an agreed upon problem, the human brains hook together in spooky ways NO one brain could ever have predicted.

Problems pop up with there IS no agreed upon a solution.

This happens socially and romantically.

The problem is we all LOVE the ideas in our brains.

In fact we love them SO MUCH we think all we need to do is share them with others, and they'll love our ideas just as much as we do.

Unfortunately, they have their own ideas in their own brains.

And they love their ideas just as much as we love ours.

This makes persuasion, even among friends trying to figure out what movie to see or what restaurant to go to, difficult.

It also makes it terrifying to walk up to a cute lady and say a few words that will make her as attracted to you as you are to her.

You can't use logic to seduce a lady.

You can't use logic to convince your buddies to eat Chinese when they crave Italian.

You can't even use logic to convince a friend who's down in the dumps to cheer up so you can get out and have some fun.

It would seem that absent an agreed upon and external problem to solve, we can only communicate in random ways that seemingly produce random results.

Perhaps you've had the experience of really "clicking" with somebody?

You go on a date and hit it off way better than expected?

Or perhaps you and a buddy were bored, and then you suddenly found yourself in a deep and never ending, organically evolving conversation about the meaning of life?

These experiences are wonderful.

These experiences are WHY we are terrified of mythical villains like the Borg, or the Pod People from Invasion of the Body Snatchers.

We LOVE our ideas.

We LOVE our opinions.

We LOVE sharing our experiences.

And the BEST scenario is when we and another non-borg human is doing the same thing.

And flowing around one of those wonderful and organically evolving conversations that seems so, so rare.

You say something that you think is cool.

They think it's equally cool and that reminds them of something THEY think is cool.

That reminds you of something, and this amazingly rare virtuous cycle of spontaneous human expression continues.

Even better is when this happens AFTER you've had sex with somebody you don't know that well yet.

When you're still in that process of discovery.

When you still have that, "This is going to be AWESOME" feeling.

Why is this so rare?

And more importantly, is it possible to CREATE this kind of feeling?

The reason is we put WAY too much emphasis on the words.

When any normal dude sees a normal hottie across the room, nobody thinks:

what sequence of feelings and emotions I should have when I walk over there?"

Everybody thinks the same thing.

"What should I say?"

But here's the thing.

Suppose you met somebody, guy or gal, doesn't matter.

And you ended up having a spontaneously evolving, two or three hour conversation.

The virtuous cycle mentioned before.

And suppose you mentioned that conversation to a friend a few days later?

How would you describe it?

You met a really cool guy or gal.

And if they asked, "What did you talk about?"

What would you tell them?

Chances are, you'd give the basic highlights, but beyond that, you wouldn't have any clue.

Suppose you met a guy or girl, went straight in between the sheets and a long, evolving afterglow conversation until the sun rose.

Does it really matter WHAT you talked about?

You already know the answer.

The words are only the things our conscious brains can focus on.

All the emotions, those things that drive all behavior, are the REAL drivers of our lives.

Even scientists who study things like marketing explain this.

We make an EMOTIONAL decision, and then a couple nano-seconds later we come up with an after the fact, rational sounding STORY about why we made that decision.

So, the answer seems obvious.

Lead with your emotions, right?

There are a couple problems with that.

One is nobody has much experience leading with their emotions, especially guys.

We are taught to lead with words.

Even worse, is EVERYBODY has a collection of emotions that live in the "danger zone" of our subconscious.

So even the thought of feeling our emotions, let alone letting them lead the conversation is TERRIFYING.

Until now, that is.

Because in this simple program, you will learn how to do that.

You will not only learn how to feel and appreciate ALL your emotions but express them.

No, not like some guy hopelessly sobbing in therapy.

But in a congruent and CALIBRATED way.

Some emotions should be shared with deep intensity and empathy.

If your best friend told you his mom just died, it would be INAPPROPRIATE to say:

On the other hand, if there is some very low level sadness expressed conversationally, it would be equally inappropriate to bust out the Kleenex box and start weeping.

One, you'll explore all your emotions, privately in your own mind, and embrace the raw energy that they are made of.

Two, is you'll learn to express them calibrated to the social situation, so you don't come off as a dick, OR a guy who starts crying all the time.

Three, is you will be able to USE your emotions, very much like you use words.

You'll be able to use them as little or as much as you want.

You'll be able to use them like a virtuoso uses notes and melodies and chords.

You'll speak with such emotional elegance people will be absolutely mesmerized by whatever it is you are talking about.

But the fourth thing you'll learn is the holy grail of social communication.

When you feel and appreciate your own emotions, and are capable of using them conversational.

If you shift from being sad to neutral to happy to excited.

Most people hear somebody talking, come up against an unexpected negative emotion and get stuck.

This is those pregnant pauses and drawn out silences most normal humans are TERRIFIED of.

And you'll slowly and deliberately lead them from THEIR unexpected negative emotion, to ANY emotion you'd like.

You'll be the emotional hero everybody dreams about.

The slayer of sadness, the architect of bliss, the conversational orchestra master of euphoria.

This course comes in two sessions.

A coaching sessions that describes this process in detail.

How to uncover and appreciate the energy in all your emotions.

Giving you much more emotional power and flexibility you can use in any situation for any purpose.

How to lead anybody from any emotion to any other emotion.

And how to do that using the ideas and experiences that already exist in your head.

The best part is this requires VERY LITTLE brain power.

Practice the rare skill of shifting emotions, and everything else comes naturally.

This also comes with a powerful hypnosis session.

A combination of a guided visualization, dropping you down just to the border of conscious and unconscious.

And a dual mind hypnosis session to combine your deeply creative, natural artistic self to day to day conversations.

Both will combine to make you the maestro of emotional ecstasy.

Michelangelo famously said he sees the Angel inside the block of clay, and it's his job to get him out.

You will learn to see an angel in every human, and use your emotional dexterity and conversational gift to bring THEM out.

Get this now and take life to the next level.

Get this now and learn to crave conversations with strangers.

Get this now and become a creator of happiness, a destroyer of doom and a conversationalist nobody will ever forget.

Get this now and turn any cutie you like into your own loyal lover, desperate for your post coital conversational rapture.

Get this now and create that once in a lifetime virtuous cycle of conversational delight in anybody, anywhere, anytime.