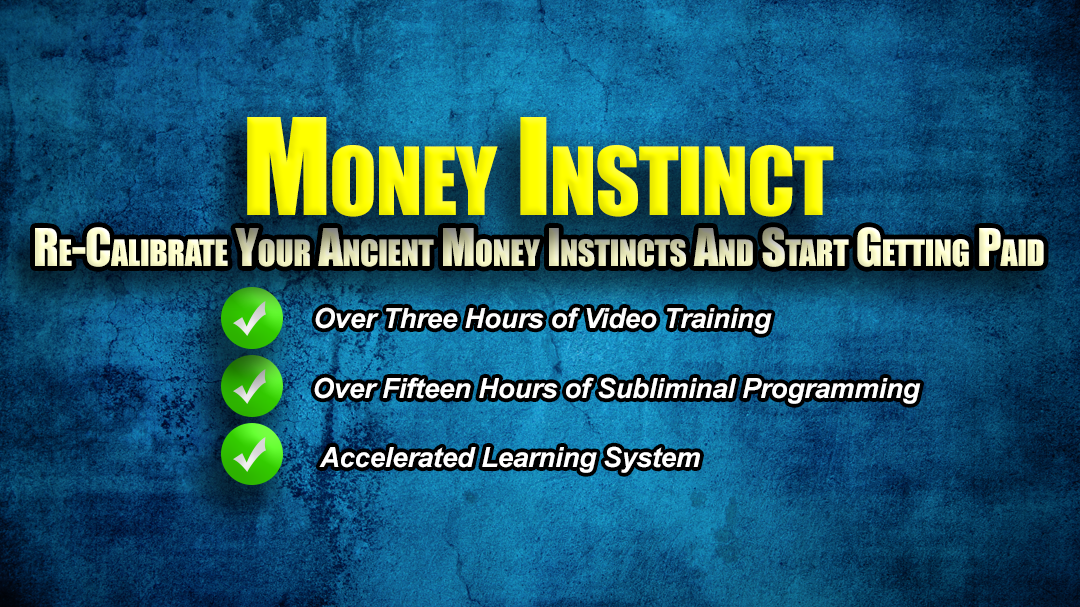 Learn all there is to know about money - including how to make some.

Fill your subconscious with money making beliefs and strategies.

What Will I Learn?

Re-Calibrate Your Ancient Money Instincts And Start Getting Paid

But at the same time, we all have tons of beliefs about getting more money.

We all have anxiety about money.

We all want more money, but beyond that, we’re mostly clueless.

Money has been around for a long time.

But more important is what money represents.

It’s easy to misunderstand what money really is.

There’s a reason they don’t teach economics in high school.

Einstein once remarked that compound interest is the eighth wonder of the world.

At the same time, most people don’t understand compound interest until it is too late.

Until they owe more than they got.

That is a horrible situation to be in.

Not An Investment Guide

That is possible, but it’s also very dangerous.

Before you even think about using your money to make more money, you need to understand exactly what money is.

Humans evolved a long time ago.

We are still evolving.

But the environment we live in today is much, much different than the one we evolved in.

All our instincts were calibrated under those ancient environments.

The easiest to understand is hunger.

Back then, it was a benefit to always be hungry.

To eat as much as you can, whenever you can.

But if you tried that strategy today, you wouldn’t fit out your front door!

We all know, on some level, we need to manage our hunger instinct.

Even if you don’t look anything like a fitness model, you know that being purely obedient to your hunger instinct is a recipe for disaster.

What makes us human?

What is different between us and all the lower animals?

Some say it’s our use of tools.

Some say it’s our ability to think of several potential future and pick the best ones.

But you’ll learn in this guide that the sum total of all our human instincts is the money instinct.

Nothing we have would be possible without money.

No invention, no landing on the moon, no medicine, no ability to travel faster than walking.

None of these would have happened without money.

The few in the past who truly understand what money was and how to make as much of it as they wanted did.

And they became rich beyond measure.

But today, it’s as if we are purposely being kept in the dark.

When you understand why, it will make perfect sense.

If you found the ideal fishing spot, would you tell everybody or keep it secret?

One of the reasons few people talk about the real truth about money is it’s natural to hate competition.

If you managed create a product or service that was insanely popular and profitable, you’d have a problem.

Namely, everybody with half a brain would see that it was insanely profitable and popular, and would do everything they could to copy you.

This is one of the untold secrets of the Industrial Revolution.

People kept inventing things, and everybody kept stealing their inventions.

Most of the inventors behind the new machines of the Industrial Revolution died penniless!

One of the fundamental driving forces was that everybody was copying the crap out of everybody else!

But since making money is based on an instinct, and not something esoteric only available to a few people, it exist in your DNA.

Our hunger instinct is straightforward. Your body needs energy, it sends you a subconscious signal that makes you eat.

You eat, and you’re satisfied.

Most of our instincts work this way.

But the money instinct is different.

The money instinct is very subtle, and is actually a combination of several other instincts.

This Isn’t A Metaphor

Just in case you’re wondering, this isn’t some kind of metaphor about money.

Money is a real tool that lives in an instinctive level of or consciousness.

But it doesn’t run on auto pilot like hunger, or the need for sex or sleep. It needs to be consciously awakened.

Just like our hunger instinct is our of whack, so is our money instinct.

But since the correlation between our ancient environment and our ancient money instinct was very delicate, it’s not automatic like hunger.

The first step is to understand exactly what this money instinct is.

This will be presented in straightforward, biological and economic explanations.

Everything will be based purely on science and human nature.

Once you understand the structure of money, and how it evolved right beside our brain, you’ll learn how to awaken it.

There won’t be any metaphysical ideas or goofy chants.

These will be pure drills.

Unlike hunger, which will always need to be managed, your money instinct will be a very powerful master.

It will be your motivator, your driver, your reason for existing. Most normal humans need to ignore hunger occasionally.

Let It Loose With Abandon

But not your money instinct.

Once you fully awaken and strengthen your money instinct, it will serve your for life.

It will be your tireless beast pulling you forward on a relentless chariot of wealth.

And unlike any living animal, the faster it runs, the stronger it gets.

Making money is the ultimate skill.

It brings together all that is good about you.

All that is powerful about you.

All that is right and intelligent and just.

By going through this course, you will know exactly why the world wants, needs and demands you unleash your inner money beast to pull you forward toward your destiny.

Once you awaken and strengthen your money instinct, your purpose will become clear to you.

Get this course now and begin the next phase of your life. Awaken your money instinct and define your life.

An awakened money instinct will provide you with unlimited motivation and burning desire to propel you relentless into your future.

Get this course and make your life an epic adventure.

Understand The True Purpose Of Money

Discover the truth about money.

That is the lifeblood of a thriving society relentlessly inventing new products, ideas and services.

Reawaken your money instinct and get in the game for good.

Get this course now and take control of your destiny.

Your course on how to understand and awaken your money instinct comes with over fifteen hours of powerful subconscious programming.

The videos in the main course, will help your conscious understand and master the concepts of money.

The subliminal programming sessions will install plenty of supporting beliefs about money.

With both conscious learning and unconscious programming, you will maximize your chances of transforming yourself to a relentless creator.

Both will serve to transform your entire being into a non-stop money making, empire building, financially independent success story.

Reverse engineer the successes you see daily and spin them into your own personal vehicle for income generation.

Master the art of brainstorming and take any random thought and potentially spin it into a money making empire.

Learn every idea into a potential income stream.

Learn to grow streams of income like farmers grow carrots.

Understand to see and leverage potential flows of money.

Stop seeing money as a static entity and tap into the trillions of dollars flowing ceaselessly around planet right now.

Understand how and why saving money is an instinct, a deep urge that exists deeply inside your DNA.

See money as potential energy, that can provide years of easy living, if you choose.

Program your mind on a deep level to live the secret of wealth, which is to always consume less than you produce.

Use as little as one dollar a week to build your ancient money saving empire.

See debt for what it truly is, negative money that represents a hole of negativity in your money future.

Build in the deep belief that starting today, you can slowly obliterate all non productive debt.

Recalibrate how you think and feel about money and re-balance your financail health and well being.

Learn to think and feel about your future further and further out.

Stop living hopelessly in the moment and see how your actions today will impact your vast future.

Play the long game and out think, out produce, out learn all your competition and leave them smoldering in the dust.

Understand the secrets of kings and empires. Start playing the long game and build your fortune.

The best teachers are your failures, but only if you can bounce back.

Develop the rarest skill today, and learn, fail and get better after every single attempt.

The biggest success stories only coming after bouncing back from series of failures. Learn to bounce back and never fear failure again.

Train your deep mind to crave success, and the work and learning and risk that comes with it.

Leave behind magical ideas about money and develop the true motivation of a champion.

Power through obstacles, get around blocks, and blast through all resistance.

All sessions mixed into one power session.

When you absolutely, positively need to cram your brain with as many positive statements at once, the master mix will set you right.

Get this course now and blast away all negative money beliefs for good.

Get this course now and turn on the ancient money instinct responsible for every invention, every empire, and every fortune.

Get this course now, build your empire, and live life to the fullest.