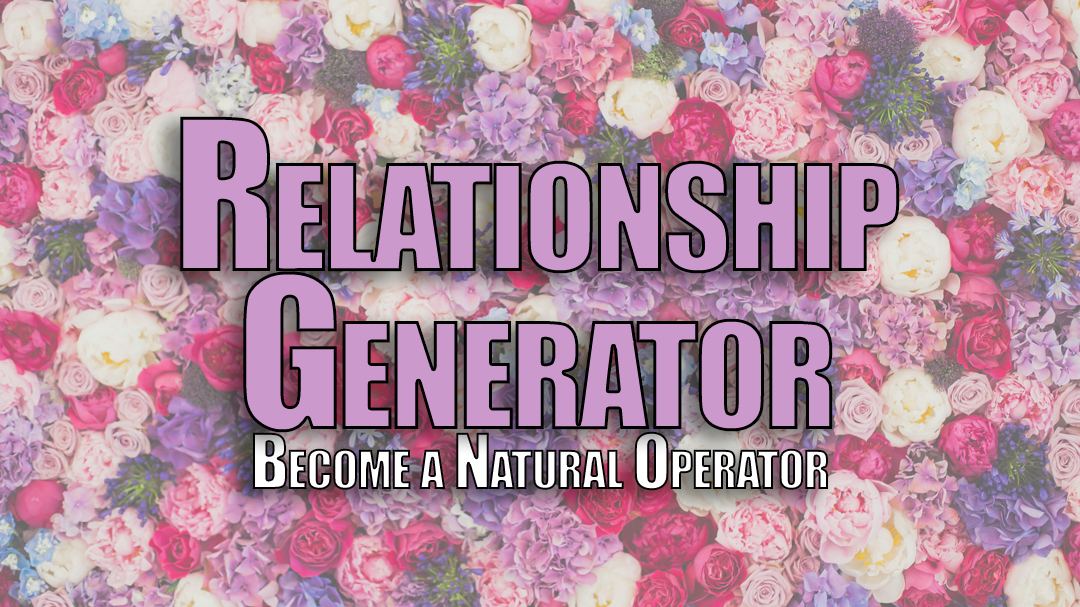 Relationship Generator
Available in days
days after you enroll

It's no secret that the modern dating game has been obliterated.

If you're a happily married academic type, it would be an interesting study why.

The things that bind humans together, both as friends and lovers, don't exist any more.

This means they need to be created consciously and deliberately.

Unfortunately, this will only make things worse.

Relationships, both friends and lovers, are meant to be completely unconscious.

They are meant to develop slowly, organically, and for life.

This is not based on any goofy idea about what SHOULD happen.

This is based on a scientific understanding of what DID happen.

We all have two sections of our brain.

And the immensely powerful subconscious part.

Modern marketers know how well you can move people if you target the unconscious part.

Friendships and romantic relationships are even more complicated.

For marketers, it's easy.

Try out a whole bunch of different ads and marketing messages, all based on hitting our unconscious triggers.

Choose the few that work the best, match the ads to the demographic, and Bob's your uncle.

You simply cannot do this on the dating market.

You simply cannot do this when making friends.

The ability to make friends easily and create romantic relationships are both absolutely necessary for our survival, and incredibly complex.

Because they are complex, the only way to create them using conscious and deliberate strategies is to create very, very short term and superficial relationships.

But this is dangerous.

Because when you are intimate with somebody, it's very easy to catch some feelings.

This is why we call the act of sex making love.

You see somebody, and feel attraction.

Then you become intimate, and catch those feelings.

But unfortunately, you are now feeling deep affection for somebody who thinks short term relationships are the norm.

This happens to both genders.

Even worse is the more you inoculate yourself against catching feelings, the more you risk obliterating your capacity for deep and organic romantic relationships.

Our ancient instincts want friendships we'll be willing to die to protect.

This is not true for most people today.

You may have heard of the idea of outcome independence.

That the less dependent you are on the outcome, the more you can flow naturally and click with somebody on a much deeper level.

This is true, but not the way people tend to think.

The way people tend to talk about it sounds fantastic in theory.

But it's nearly impossible in practice.

You see somebody and you WANT to talk to them.

Right from the beginning you have an outcome.

You want to make a positive impression.

You don't want to get kicked in the nuts, slapped in the face or rejected.

Before you even start the conversation, you have a good idea in mind of what you WANT and what you DON'T want.

This is the OPPOSITE of outcome independence.

It's very, very difficult to switch from having a clear objective to having no objective.

At least not in the short term.

In the long term, it is much, much easier than you may realize.

When you change your filters, it will be much, much easier.

This is precisely what you will learn in this program.

How to better see the world around you.

How to better think about the world around you.

How to better appreciate the world around you.

How to better operate within the world around you.

Not as a seek and destroy operator, looking for specific objectives and then crushing them, one by one.

Sure this sounds cool from a bragging to your friends strategy.

But it absolutely SUCKS as a dating or friend making strategy.

Instead, consider the Natural Operator.

Somebody very attractive and charismatic.

Somebody who cruises through life, and enjoys every single conversation.

Not from what you can get FROM them.

But simply for the pure enjoyment of talking to another human.

Whether it's for a couple seconds, or long, drawn out conversations that evolves just as spontaneous as it was started.

What happens when you BECOME a Natural Operator?

You'll be outcome independent on a long view.

You'll simply talk to people because you enjoy talking to people.

And with the skills you'll learn in this program, the skills that will be programmed into you during the hypnosis session, you will be that person.

Not only will you enjoy talking to people just to talk to people, but you'll make everybody lucky enough to talk to you just a little happier after the exchange.

And because you won't have any outcome, just a positive expectation of a happy exchange, you won't care WHO you talk to.

And some of these people will enjoy you.

They'll enjoy you very much.

So much they'll ask you for your number.

Sure, many you won't be interested in seeing again.

But some, you will.

And this will create a natural sales funnel.

You, gliding through life enjoying conversations whenever a chance pops up.

More and more people will be asking for your contact information because of your natural personality.

Your friendly and engaging personality.

As you slowly move into your happier and friendlier future, you'll be bringing more and more qualified people with you.

Now, what does that mean?

Who are "qualified people?"

But more importantly, these are people that did the work of making YOU their friend.

These are people who did the work of seducing YOU.

These are the people who actively pursued YOU.

Compare that to most folks today, who chase anybody that makes eye contact.

And they chase them with a scarcity mindset, which means they fail much more often than they even get close to succeeding.

And then there's you.

Who'll never have to worry about chasing anybody ever again.

You, who is LIVING the abundance mindset.

Having the very rare experience of being pursued simply because your naturally friendly and refreshingly organic conversational style.

You'll be the guy or gal everybody wishes they'd meet..

So when they see you casually stroll into their lives, they'll be desperate to be on your team.

One of the reasons our modern world is so chaotic is it's very, very new.

Our ancient instincts, that have been inside us for hundreds of thousands of years have no idea what to make of it.

But once you shift the polarity of your go-to social operational model, you'll be the dream guy or gal they've been looking for.

The first part is a powerful coaching session.

That explains everything in detail.

But more importantly gives you three very powerful exercises to do.

They seem simple in the short term, but they will slowly build until you get to the tipping point.

Where your social behavior is exactly the way it needs to be.

Where you show up, act naturally and spontaneously, and people pursue you.

Because it's natural and spontaneous, you won't need to think about a thing.

You will BE the friendly, outcome independent person everybody wants to meet.

You will BE the Natural Operator, who makes friends and lovers without even thinking about it.

And because this will be based on subconscious, not conscious strategies, you won't even feel like anything's different.

You'll be your natural self, zero outcome, and people in your network of friends and lovers will do all the rest.

In addition to the coaching session is a two-part hypnosis session.

The first part is a guided visualization that takes place under a light hypnotic trance.

An accelerated, hypnotically guided practice of all the material in the coaching session.

The second half is a much deeper hypnotic trance.

Where you don't need to pay attention at all.

And the ideas and metaphors are programmed in on a much, much more profound and subconscious level.

The two will combine to make you a Natural Operator.

Get this now, and never worry about relationships again.

Get this now, and enjoy life the way you want and slowly and naturally build your team of loyal followers and supporters.

Get this now, and never worry about what to say, or any other modern goofy dating strategies again.

Get this now and become a Natural Operator, living life from an abundance mindset filled with love and friendship.

Get this now and give everybody you meet the pleasure of YOU, subconsciously compelling them to do anything they can to stay in your good graces.