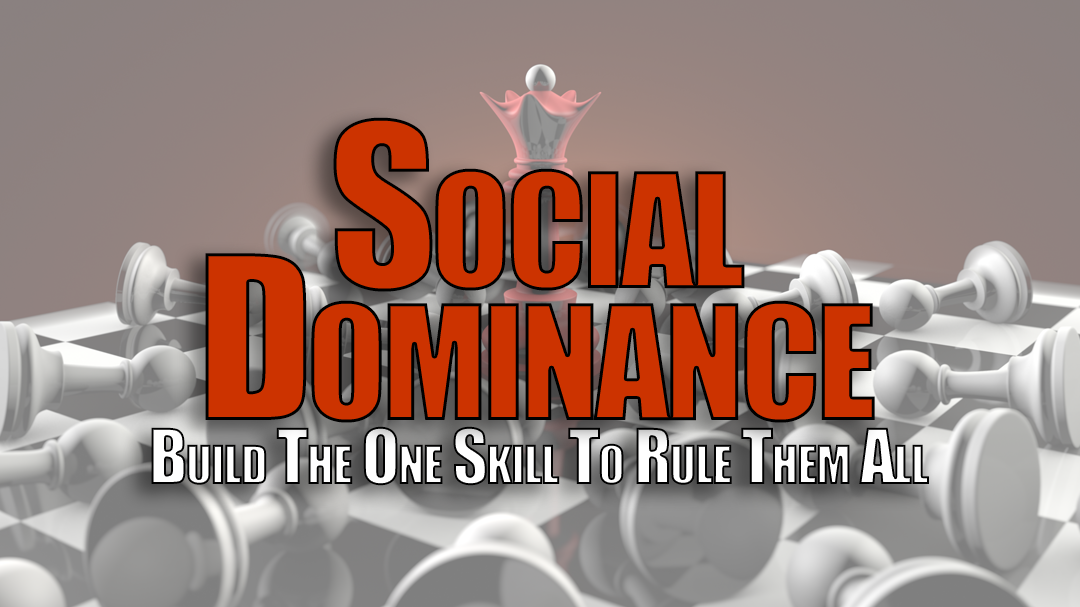 Build The One Skill To Rule Them All

Social Dominance
Available in days
days after you enroll

Build The One Skill To Rule Them All

It's common to want things we don't have.

It's common to not know how to get those things we want that we don't have.

One of the biggest problems with going after any endeavor is opportunity costs.

Those things we can't do when we go after what we want.

You want to lose weight, you can't eat your favorite foods.

You want to chase the pretty ladies, or pursue a worthy career, you can't waste all your free time playing video games.

But even beyond often hidden opportunity costs, life is extremely complex.

Ask any dude what ladies want, and they'll give you different answers.

Ask any lady what ladies want, and they'll give you different answers.

One of the reasons is that today life is much, much more complex than it used to be.

If you've ever tried the willpower diet and failed, you're not alone.

That's because the willpower diet does not work.

We love to think we are in command of our lives.

That our brains, our free will, our willpower drives our decisions.

But there is a much, much deeper force at play.

Those deeper forces from which we can run, but cannot hide, is our instincts.

Way back in the day, before we invented big cities, life was difficult.

This would increase your chances of dying.

This would decrease your chances of passing on your genes.

And since you are here, now, listening to these words, you have made it through the two million years of generational genetic filters.

Most humans have not.

And way back then, just as it is now, there is ONE THING that trumped everything.

Back in the day, life was simple.

They didn't do this because of some goofy social contract.

They did this for the rewards.

Their rewards are the same rewards we all crave today.

But most misunderstand what it took to become a consistent alpha killer back in the day.

Not the best looking guy.

Not the strongest guy.

The guy with the best ideas.

The guy who could communicate those ideas effectively and persuasively.

One dude couldn't kill a wooly mammoth on his own.

A team that would follow him, believe in him, and be loyal to him.

Pay close attention to this next part.

The alpha was the guy who led the team who got the calories that kept the entire tribe from dying of hunger.

This meant the ancient alpha traits that generate attraction from the ladies and respect from the men are a RESULT.

From the real value that ancient alpha provided to others.

The real tangible value that kept people from dying.

Not value from having a bunch of stuff.

This is exactly why the dating market is such a trainwreck today.

Modern status is not real status.

Or validation through social media is fake validation.

Walking around with expensive clothes, a six pack and a chiseled Chad-face looks good.

But it doesn't provide ANYBODY with real value.

But when you show up, and walk and talk like an ancient alpha, people will notice.

This is the missing ingredient in attraction.

This is the missing ingredient in social status.

This is the missing ingredient in interpersonal frame battles.

This is why the more you dominate socially, the more everything you want will come as a natural result.

This will create much more natural attraction from more women.

This will create much more natural respect from more men.

You will demonstrate a frame so rare today, everybody will wonder who you are.

This is based on understanding how ancient societies were organized.

This is based on three simple exercises you can learn, and practice that will slowly build up your natural frame domination.

That will slowly build up your social dominance.

This brings up those opportunity costs we mentioned earlier.

That if you chase one thing, you can't chase other things.

Some men chase the ladies, but can barely pay their rent.

Some men chase money, but fall apart in the presence of a pretty lady.

Some men chase looks, six packs, etc., but don't have either.

But according to our ancient programming, programming just as irresistible as our ancient hunger, once you build social dominance, you need chase nothing else.

Career respect and admiration comes as a natural result from social dominance.

Attraction and sexual fulfillment comes as a natural result from social dominance.

Financial success and freedom come as a natural result from social dominance.

Put your attention on increasing your social dominance, and everything else will fall into place.

This is precisely what will happen once you start this program.

A short, to the point coaching session.

Explaining the truth of human nature, and why we are the way we are.

More importantly, you'll understand the three critical skills to build that will slowly and consistently build your social dominance.

Useless, interpersonal frame battles and idea contests will be a thing of the past.

You'll see this, and everybody else will see you seeing this.

And they'll notice subconsciously that your world view, your natural ambition, your growing leadership is much more important than any trivial frame battles.

A combination of a guided visualization and a deep mind session.

To awaken the natural killer instinct that is within you.

Expressing your opinions, even if they are different from everybody around you, will not only become more natural, but this will make you much more attractive.

Finding and pursuing your true purpose will become second nature.

No matter what situation you're in, you will radiate that ancient leadership energy that will attract loyal followers and supporters.

Beneath a certain level of social status, you've got to chase everything.

Above a certain level of social status, everything will chase you.

Ladies, money, career opportunities, and anything else you want.

Get this now and wake up your ancient leadership skills, and dominate.

Get this now and build a frame so dominant, people will beg to be included.

Get this now and leave behind the stress, worry, anxiety and blame that is so common in today's society.

Get this now and become a leader and naturally dominate in any social or business situation.

Get this now feel and the power of your ancient ancestors flowing within you and build your legacy.