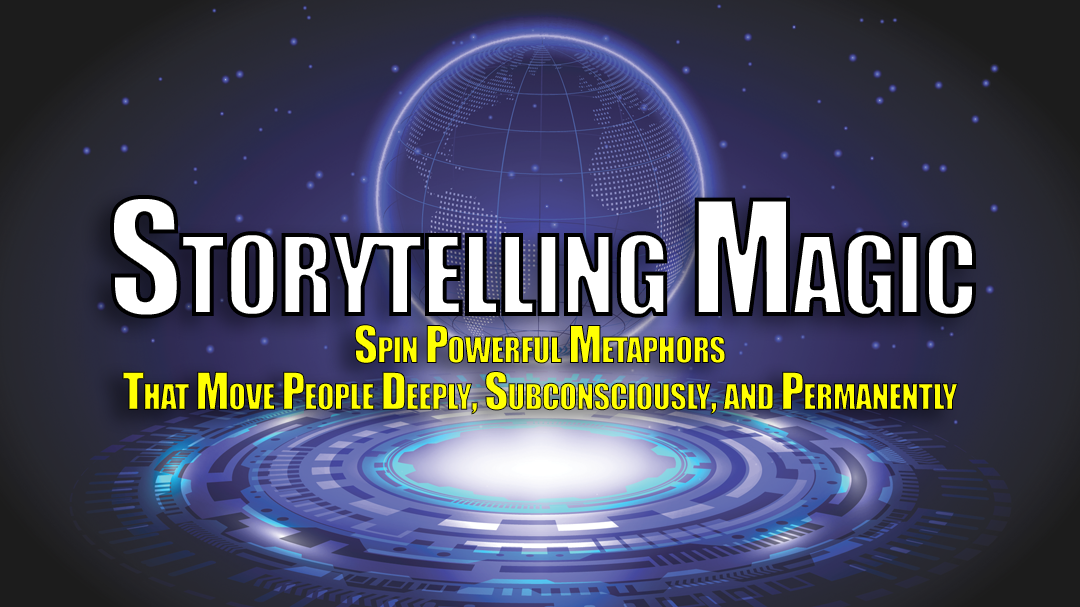 What Will You Learn?

Whenever we open our mouths, we want something to happen.

If we are telling a joke, we want somebody to laugh.

If we are asking for directions, we'd like a simple answer.

If we want a phone number, we'd like a smiling face that says yes.

The idea that the main purpose of human communication is persuasion has been around for a long time.

Even crows have evolved the ability to caw differently to mean different things.

Orangutans make a series of clicks that means danger.

The clicks persuade all the other orangutans to get safe.

The idea of persuasion is as instinctive and natural as language.

Even before we learn how to speak, we learn to persuade.

Sure, or technique is simple, but it's effective.

We scream bloody murder until somebody gives us what we want.

You've likely heard of the four levels of learning.

Language and persuasion is something we learn at a very young age, so it's something that is always thought of as being natural.

How we use persuasion.

We all come pre-programmed with a couple basic persuasion strategies.

Ask until we get it.

Using any position of power.

Turns out you can go a long ways with this technique.

And make a lot of money.

If you're in a clear negotiation, sales for example, there are many, many tools you can use.

But what happens when you want to persuade somebody, but you don't want them to know you are persuading them?

Dale Carnegie notes that you can get anybody to do anything, so long as they believe it was their idea.

This is one of the iron laws of persuasion.

If you are attempting this technique, and your target figures out what you're up to, it will backfire.

Nobody likes to be manipulated.

Even if it's for their own good.

It turns out that people have been using stories to persuade since the dawn of time.

Ever since old cavemen told stories around the campfire, they've been using stories to persuade.

What's the most basic, most ancient story that exists?

This has been found in every culture.

You'll find this in every Hollywood blockbuster and bestseller.

What is the story structure?

Once upon a time there was a young boy.

Then something happened and he was forced out of his comfort zone.

There he met some friends.

They, too, were scared, confused and stumbling along their journey.

Finally they discovered there was a very bad villain.

So bad they would have to defeat him.

This became more important than life itself.

Every young caveman has to grow up and become an effective hunter.

What better to motivate him that to carry around heroic stories in his mind while out hunting?

Did he remember the storyteller?

He remembered the hero.

Turns out this strategy is build into our genes.

Of teaching young hunters how to be brave.

How to fearlessly kill the animals to feed the tribe.

The storytellers didn't know they were persuading.

They were just passing along stories they'd heard.

The young kids didn't know they were being persuaded.

They just soaked up these fantastic stories.

Another way to look at these ancient storytelling techniques is a very clever, very covert, and very powerful way to implant a post hypnotic suggestion in the minds of these young hunters.

What suggestion would that be?

When You See A Scary Animal, You Will Feel Heroic Courage, and Kill It

Turns out that once you know the basic structure of human nature, you can spin stories for any purpose.

And you don't have to start them with, "Once upon a time..."

In fact, nobody will know you are using this very ancient and very powerful technique except for you.

They way it will come across to them is just like a regular, ordinary conversation.

You'll tell a quick story about something that happened to a friend of a friend.

Then they'll get an idea.

They will think is it their idea.

They will carry it out as if it were their idea.

But it will be your idea.

And so long as you keep your yap shut about it, they will never know.

This will allow you an enormous amount of persuasive power.

Nobody will ever know what you are truly capable of.

From everybody else's perspective, you are merely an fascinating conversationalist.

But you will be able to put any ideas you want into their heads.

No, you cannot become a super villain.

The requirement is the idea you secretly put into their brain must benefit them somehow.

You cannot trick people into robbing banks or becoming assassins.

Once you understand how to link any ideas you want to their deep instincts, they will crave following your hidden advice.

It will not only be their idea, but it will feel instinctively pleasant.    This means they will eagerly do whatever you want.

If you're in sales, you'll make your money.

If you like building relationships, you can create insane amounts of attraction.

If you have kids, you can get them to behave much more like you'd like them to.

If you sell from the stage? You can build an empire.

This goes much, much deeper than common hypnotic techniques.

Even deeper than the most covert hypnotic techniques.

These are based on deep human instincts that few understand.

Even if you never want to persuade anybody, these ideas will turn you into a world class listener.

You'll find that in many cases, all you'll need to do is listen, ask a few questions, and the answers to their problems will pop right into their mind.

This will give you super human listening skills.

But if you decide to take it further, you will become a walking wizard.

You'll understand the deep connection between words and thoughts.

The metaphorical world that binds the two.

Instead of using your factory programmed language skills, you will become a master of the metaphorical world that binds thoughts and words.

One Skill To Rule Them All

If you look back over history, of all the great leaders, both righteous and evil, you will find they possess one power above all else.

The power of words.

The power to stand up and spin metaphorical stories so powerful they compel entire nations to act.

This guide will teach you everything you need to develop that same power.

The Confidence Of Voltaire

About the power of words, Voltaire famously said:

Give me ten minutes to talk away my ugly face, and I will bed the Queen of France.

If you watch and understand this course, you will have access to that power.

If you do the exercises in this course, you will develop this power.

How you wield this power is completely up to you.

Own Every Social Situation

Learn the power of storytelling and become a social magnet.

Get this guide now and start spinning unforgettable metaphors.

Make Millions From The Stage

Combine these skills with basic public speaking and make a fortune.

Tell stories from the stage or screen and move millions.

Get this guide now and captivate crowds.

Master the art of thought.

Create powerful hallucinations at will that engage and lead their imaginations.

Get this guide now and become a shaper of minds.

The conscious training in this course will teach you the skills you need to significantly and consistently improve your storytelling skills..

But even that is only scratching the surface.

On top of the three hours video training to teach you storytelling technique you won't find anywhere else, are over twenty hours of deeply hypnotic, brainwave assisted subliminal programming.

Each session comes in three versions.

Your mind will be taken down to a deep theta level, half awake, half asleep, perfect for reprogramming your subconscious.

Each session is an hour in length, comes in two versions, and has more than four hundred individual statements to fill your deep mind.

Statements leveraging powerful beliefs, ideas, strategies and unconscious behaviors to help you become the most persuasive and magnetic storyteller ever.

Listen to the gamma versions while awake and alert.

Whenever you want a quick confidence boost to before any event where you need rapid acceleration of your storytelling skills.

Listen to the video sessions for your conscious mind.

Listen to the subliminal sessions for your unconscious mind.

The two will combine to make you the most engaging storyteller and covert persuader on Earth.

Train your deep mind to turn any sequence of events into a mesmerizing story.

Master the art of story chains and leave everybody much better off than when you find them.

Resonate with their deep instincts and powerfully move their emotions anywhere you want them to be.

Leave such a powerful first impression that people will be desperate to see you again.

Take control of any group or crowd and hold them in the palm of your hand.

Lead their thoughts anywhere you want them to be.

Understand the deeper instincts underneath all content level issues.

Covertly move any individual or crowd from wherever they are to where you'd like them to be.

Leverage your deep and intuitive natural learner and master these skills in the shortest time possible.

Remove all false blocks to learn and rapidly accelerate your storytelling skills.

Use any social interaction, any conversation, real or fictional, to further enhance your skills.

Make everybody feel wonderful every time you are around.

Give everybody the pleasure of interacting with you.

Program everybody, friends, family and strangers to associate their deep happiness with your presence.

Build the powerful confidence to move crowds and get paid tons of money.

Monetize your storytelling skills in any sales job and make yourself a fortune.

Develop storytelling skills few possess and leverage the law of supply and demand strongly in your favor.

Easily find relatable stories and anecdotes inside your mind and leverage them with laser like accuracy.

Break apart their stuck states with metaphors and anecdotes that will resonate for weeks, months, and years.

Discover powerful ways of expressing ancient and instinctive truths and demonstrate your intellectual and conversational magic.

All statements from all sessions mixed in one powerful brain bomb of storytelling, covert persuading genius..

Flood your brain with positive statements to build yourself into the most compelling story teller around.

Over three hours of conscious training, over twenty hours of subconscious reprogramming.

Get this course now and build your hypnotic, persuasive and seductive powers to levels never imagined possible.

What Will You Learn In This Course?

Secrets To Any Success

Why Goals Will Fail

How Goals Will Succeed

The Story On The Side Pattern

Best Metaphors Are Other People

Sliding From Story to Story

A Story For Every Problem

An Anecdote For Every Issue

A Reframe For Every Objection

Leading From Fear to Desire

Leading From Problems To Solutions

How To Keep Them Subconscious

How To Say Anything

How To Imply Anything

How To Assert Any Idea

Riffing On Your Own Stories

Be The Star Of Any Party

Make Millions From The Stage

The Secret of Every Motivational Guru

Everything Is A Metaphor

The Reason For Human Stories